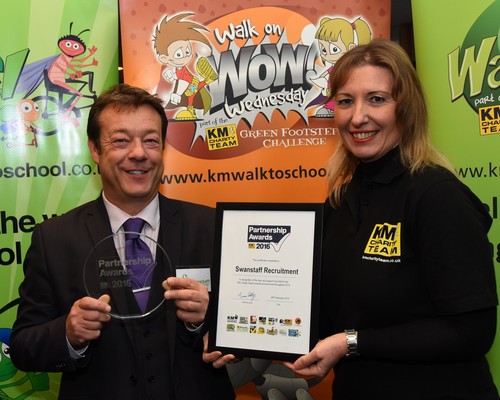 Fifty organisations were honoured at the inaugural KM Partnership Awards staged last week. The winners received accolades for playing a key role in helping the KM Charity Team deliver its range of services for schools and good causes.

Swanstaff sponsored the KM Mud Run in 2015 and we are also signed up to sponsor the KM Colour Run in June 2016  where we will man a "paint station" and also have a group of runners participating.

Steve Rogers, Managing Director says "It is great to be recognised for our committment to charities and the local community, corporate social responsibility is really important to our company. I am proud to say that my staff often go above and beyond to raise money and awareness for good causes. The KM Charity Team do a fantastic job to raise money for good causes in the community and it is great to be a part of that".